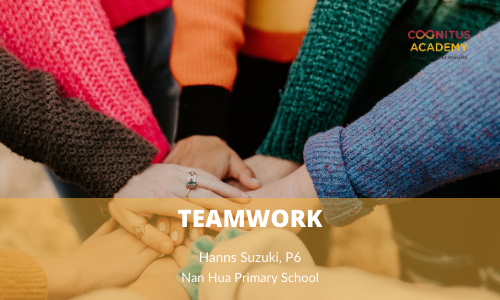 “Class, I have a piece of good news,” Mr Tan’s voice rang out across the class. The once rowdy and uncontrollable class immediately lapsed into silence. Mr Tan then cleared his throat and continued, “Our class has been selected for the National Coding Challenge. I am proud to inform you of the five contestants who have demonstrated high levels of potential in their computing skills: Ethan Liew, Jane Lee, Joe Chew, Chris Lim and Dylan Ng. Congratulations!” This was followed by a round of applause from the class. I, however, was not at all amused. Me, Dylan, working with Chris? Not a chance!

Ethan and Jane were the sort of “normal” people, cooperative and willing to accept criticism. Joe was the same. Chris, however, was the black sheep of the herd. Selfish and spoilt, he always thought that he was the “big boss” of the group. Whenever he entered a group, that group was sure to fail. And I knew we were going to.

I was right. The moment we met up at Ethan’s house the next day, Chris proclaimed himself as the leader. Although we were about to protest, Joe shushed us as he knew better. He had learnt from experience that Chris was not to be messed with. So, there we were, typing away at a document, with Chris strutting round pompously like a peacock, chiding us when we messed up. This episode repeated itself for three days in a row. With the entries for the coding competition to be submitted in a fortnights time, I failed to see how we were going to have a single thing to hand in with our lack of teamwork.

That was until that fateful day arrived.

On that day, we were halfway done, gathered at Chris’s house to review our progress. By then, we felt that we had done a reasonably good job, but all Chris had for us were criticisms. As expected, Chris launched into a harangue about our lack of knowledge of coding, how he was the one that we should always follow, our plain “stupidity” and “foolishness”. This was too much for Jane and me. At the same time, we voiced out our thoughts.

“Will you keep your dung-filled mouth shut!”

Ethan and Joe seemed to be loving how Chris stopped in mid-sentence, his mouth open. The next moment, we wished that we had heeded Joe’s advice a few days earlier.

With one mighty growl, he got up from the chair and looked at me and Jane as if he was coming in for the kill. One punch and Jane’s mouth has a tell-tale red line running own from it. Being a timid girl, she immediately burst into tears and swept from the house. I, however, racked my brains for a solution to prevent the fist of death from landing on my nose.

As a last-ditch attempt, I pressed right click and scroll back twice.

For a while, Chris could not say a word. Looking at the blue screen, he put his hands over his mouth. Then he went into a sob. Tears leaked from his eyes. Knowing that there was no way to help him, we left.

The next day at school, when we sat down at the computer terminals, we were surprised to see Chris typing away. It was only with a stroke of luck that he had memorised the contents and managed to type it back in.

Needless to say, with this newfound teamwork, we handed the document in a day early.

As I continued to admire the “first prize” medal on the wall, I grinned weakly. Not because we won, but because we had learnt an important virtue and lesson.