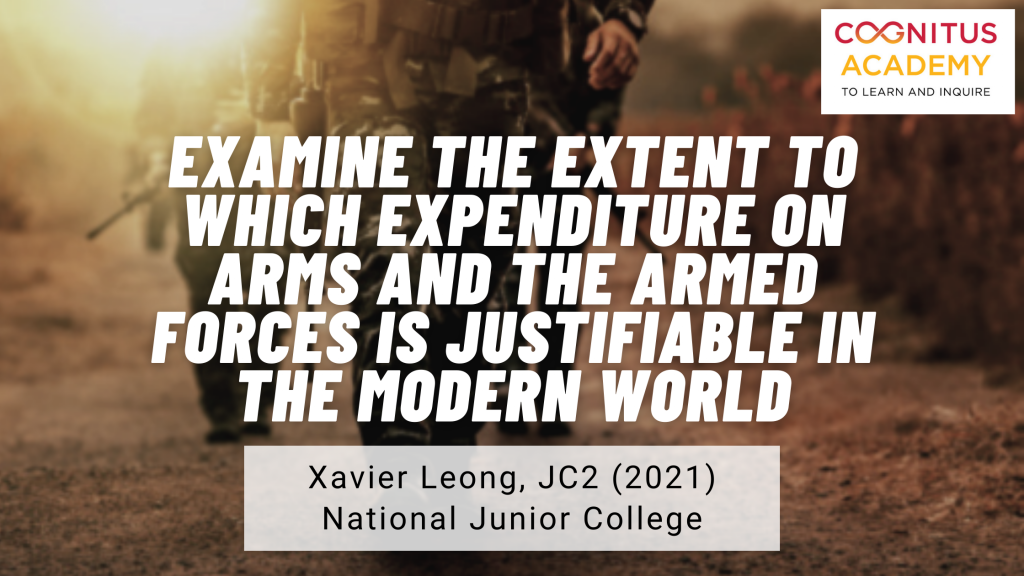 The modern world is so interconnected that the need for armed conflict among nations has been deemed unnecessary by pacifists. However, at a time when the deadlines for global commitments to alleviate pressing humanitarian and environmental issues, such as reducing poverty by half through the United Nations Millennium Development Goals or committing to reduce carbon emission through the Kyoto Protocol, have lapsed, such wanton spending on upgrading our destructive capabilities seems ludicrous. This paradox can be explained using International Relations (IR) Theory. IR, simply speaking, splits leadership styles into two main ways: realists, who prioritise material and military power; and liberals, who think that there are other methods to enhance self-security. Nevertheless, both camps acknowledge that there is a time and place for expenditure on the arms and armed forces.

Liberals argue that countries should not solely invest in arms and the armed forces as there are other methods of enhancing security among states, such as trade, investments, and movement of people. One facet of liberalism is economic liberalism, which is created through trade, investment and movement of people. In fact, Singapore secures itself largely through economic engagement with the international community. The government capitalised on economic liberalism to boost the country, giving foreign Multinational Companies (MNCs) the ease of mind in setting up here. Singapore came in second in Asia and 18th worldwide in a ranking of simplest places to do business in, according to the 2020 Global Business Complexity Index. As such, this reduces the incentive for armed conflict as Singapore’s economy is heavily reliant on international trade and movement of people from neighbouring countries and around the globe. Waging a war would cause Singapore to lose key trading partners, causing our already fragile economy to spiral downwards. As our government prioritises economic growth, they acknowledge that spending a majority of the annual budget on arms and armed forces may be unwise.

However, realists argue that countries should invest in arms and the armed forces as states prioritise material power like military and economic resources. They also engage in self-help and form alliances when they are too weak to defend themselves. The prioritisation of material factors over ideational power creates an apparent need to purchase arms and invest in the armed forces.

Furthermore, states are assumed to be in anarchy, where there is a need to maintain the hegemony of the dominant state. This makes the purchase of arms seem more necessary. Realism also assumes that all gains are relative (i.e., zero-sum game). States need to buy more weapons to be more secure so as to not lose to their geographical neighbours. However, this will lead to a security dilemma, which can lead other states to respond with similar measures, producing increased tensions that create conflict, even when no side really desires it. For example, when China acquired nuclear weapons in 1965, its geopolitical nemesis, India, soon acquired their own nuclear arsenal. This caused Pakistan to acquire nuclear weapons as well. Thus, in order to prevail in a dog-eat-dog international stage, realists perceive that it is necessary for states to spend on the arms and armed forces.

In light of new security threats emerging in the modern world, spending on arms and the armed forces is seen as inevitable. In recent years, the proliferation of insurgencies and non-state actors that threaten the security of states has increased the need for military spending to safeguard the lives and liberties of people. For example, the Middle East has been increasingly unstable in recent times due to religious extremism. This has captured the attention of Western superpowers. To put a halt to terrorist activities and protect its citizens from further harm, countries such as the U.S., France, and even Russia have sent in troops, and provided intelligence and ammunition to the region in an attempt to control the situation by wiping out terrorist groups. Thus, the evolution of threats in the modern world from aggressive states to non-state actors means that spending on the military is still necessary.

In conclusion, while it might seem that the need for spending on arms and the armed forces has faded over the years, in reality, the need for military spending remains pertinent in the modern world with the ever-growing range of security threats that can only be curtailed with military force. Although it is ironic that destruction is best at preventing destruction, one cannot deny the crucial role that arms and armed forces play in maintaining the peace between countries in this highly globalized world.