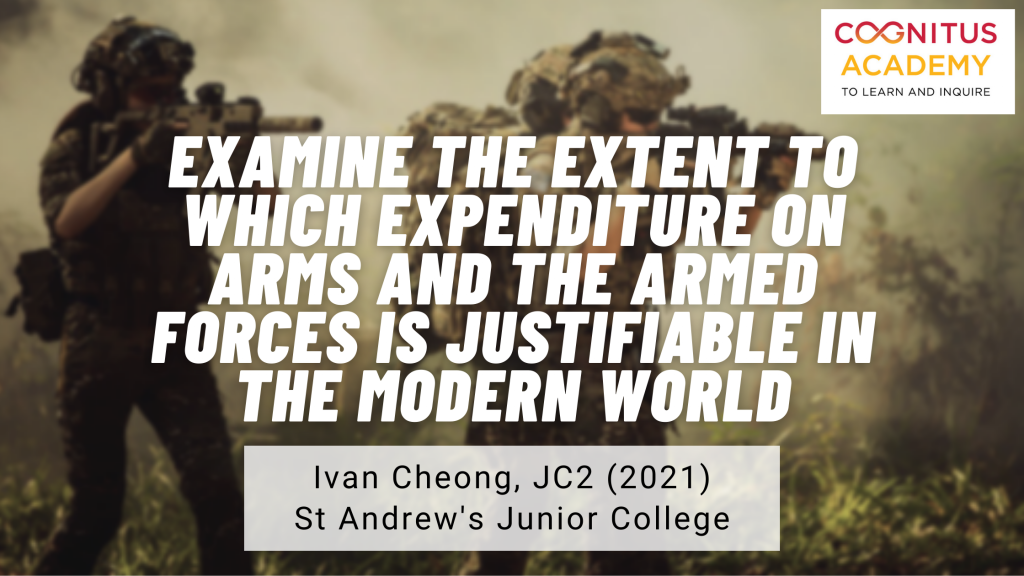 Weaponry and violence have almost always been used as means to handle irresolvable situations. They are usually caused by territorial disagreements or the fear of being attacked, such as in World Wars I and II, and the Cold War. Trillions of dollars were spent on war efforts. However, in modern times, is there really no other way to resolve conflicts apart from guns and violence? In some cases, non-violent ways such as diplomatic negotiations and trade deals help countries get along despite their disagreements or fears. The benefit is that no blood is shed and there is a much lower financial cost. In other cases, brute force and violence are the only way to solve issues. It can be more effective at solving disputes. In this essay, I will discuss different situations such as China-US tensions, Singapore’s extreme defence, China’s nuclear disputes and Russian-Crimean territorial disputes. Each circumstance shows justification for the expenditure of arms and armed forces.

Violent means are not very much sought after in the modern world, since a more humane approach to resolve issues has proved to be more beneficial than using arms and armed forces. Such approaches can be through trade deals or economic ties. Take the United States and China for example. In 2019, the US channelled $116.2 billion of Foreign Direct Investment into China. China is also the world’s largest holder of the US Treasury bonds. There are also a lot of imports from China, such as computer technology. The US sees China as an economic and military threat to its position of a world superpower, and desires to bring it down. US spending on its military has fluctuated over the past three decades, but has, overall, stabilised at around $700 billion. China, however, has increased its spending over the last 30 years from around $2 billion, to $200 billion. At this rate, China will surpass the US in military spending, a reflection of its military power. As for its economy, China has surpassed the US in its GDP since 2018 and the gap is growing wider. Fortunately for China, it holds so much US currency, investments and economy that an all-out attack on China may cause serious harm to the US economy and society. Therefore, economic ties are good means to deter physical attacks caused by disagreements and threats, and unlike violence, much less people get hurt physically and mentally.

Sometimes, a country with a geographical disadvantage compared to its neighbour needs to compensate for the disadvantage by having extremely powerful armed forces and weaponry. This is to make unfriendly neighboring countries think twice before attacking instead of just forcefully sending in troops to loot and take over. Such an example would be Singapore. Singapore’s severe lack of land and natural resources gives it a geographical disadvantage in fighting a war that occurs within itself or one that lasts for a long period of time. Its neighbour, Malaysia, would want Singapore’s advantageous location along the South-east Asian sea trade route. To prevent Malaysia from taking over Singapore, the Singapore Ministry of Defence has advanced the military technologically, and spent billions of dollars more than Malaysia has in its 2014 defence budget. This is to deter Malaysia from attacking Singapore. If they attack Singapore and Singapore loses, it will drag Malaysia down with it while fighting, resulting in severe damage to Malaysia through concentrated fire power. Therefore, countries, such as Singapore, who have some sort of disadvantage in protection against its neighbours can justifiably spend money on arms and armed forces in an attempt to protect themselves, and the freedom to live under their rule, from potential future attacks.

Sure, having superior military power grants protection via deterrence, but such a survivalist mindset may backfire. Tensions and war may break out in an interconnected world. Countries are not very likely to attack another country out of anger or because of territorial and military disputes, but because the effects of it ripple very easily. Having so many weapons can make the defending country seem like an aggressor. Examples would be China, India and Pakistan. In 1965, China built its own nuclear weapons due to its desire to overpower. India, which is beside China, was afraid of China’s sudden rise in power and that they had become a nuclear threat to them. Out of fear of being weaker and to protect themselves, India started building its nuclear programme and weapons in 1974. Pakistan, which is beside India, for the same reason as India but towards India, decided to develop nuclear weapons in 1998. All of them were afraid of each other and tensions increased. All of these tensions would never have happened in the first place if China had never wanted such power. Therefore, expenditure on arms and the armed forces is unjustifiable as they can lead to increased international tension, hence increasing the chances of war occurring.

Expenditure on arms and armed forces is frowned upon nowadays. People see it as a reflection of an aggressive country, which as seen in history, tends to be very destructive to world peace. In a modern era, negotiations, sanctions and treaties are more favourable than classic physical warfare, which can be very bloody and heartbreaking. An example would be the 2014 Russia-Crimea incident. In 2014, Russia invaded Crimea, annexed it, and integrated it into the Russian Federation. The European Union and the US could have simply fought against Russia with nuclear power or invaded Crimea to push out Russian influence, but instead, they sanctioned all imports into Russia from coming from the European Union. If it were the early 1900s, however, they would have most likely done the first. This is because of the change in perspective of war. In the 1900s, it was common for people to only be interested in their countries’ interests and increase in power, but now they are more concerned about achieving world peace and balancing power. Having seen their friends, families and comrades die beside them have given those who fought in war a great distaste for war, and it has caused unbearable harm to them. They wish to settle disputes in a much more humane way where no one dies, and this trend continues till today. Therefore, expenditure on arms and armed forces is seen as unjustifiable in the modern world because it is seen by many as a bad solution for conflict or territorial disputes. It is politically and socially incorrect.

In conclusion, it is not very justifiable to have a high expenditure of arms and armed forces in this modern era because of the economic repercussions it has on the aggressor and victim country, and the bloodshed from the wars. There are cases, though, where a country is at a disadvantage and needs military power to protect itself and deter against enemies, and its survival is deemed more important than the economic impact. Then again, the country spending a lot on military expenditure to protect itself may also cause others to see it as the one who will be bringing harm and, from a diplomatic standpoint, it is not good. Hence, expenditure on arms and armed forces is usually unjustifiable.