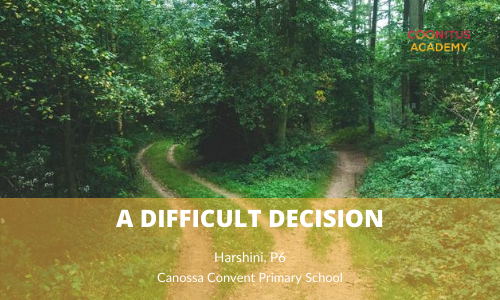 The sky was filled with amber tinted clouds. With the sharp shrill of the alarm clock, I was ready to start a brand new day. I had just gotten limited edition tickets to the top movie this year, ‘Superman’. I was very excited to show my two best friends the two tickets I got. Jack, John and I had been friends since we were five, and knew each other inside out. When I got to school, I started to flash my tickets around with my head held high. Everyone in school, even some staff, gazed in awe.

“Hey, Tom!” yelled my best friends as they ran towards me. I gave them a big hug. Then Jack asked me if the tickets I had were for them.

He mumbled that I only had one extra ticket, “It is ok. We will give you time to decide.” When John and Jack said that, part of me felt they were not really ok with it.

Ring! The bell for the start of class rang. Walking into class, I realised that if I picked one of them, the other would be upset. Then I thought to myself, “How did I get myself into this difficult situation?”

Recess time arrived faster than I had expected. After I had bought my food, Jack and John started to come towards me. Thinking that they were going to ask me about my decision, my palms got sweaty. To my surprise, they did not ask me. Instead, John asked me if I needed water and Jack asked if I needed more tissue paper. I was completely baffled as they started to do all these nice things. Thinking it was what friends would do, I enjoyed their help.

Jack and John’s charm offensive went on for a few days. As the movie date got closer and closer, people started begging me for the extra ticket. One of my friends, Lisa, was eager to get tickets as she had never been to a movie before and her parents could not afford tickets. The burden of this difficult decision weighed heavily on my heart.

As I was walking home after school, I noticed John and Jack looking as if they were having an argument. I hid behind a bush next to them and eavesdropped.

“Tom will definitely give me his ticket for all the good things I have done,” Jack said.

“No, I did more good things for Tom. He will give me his ticket,” John retorted.

My jaw dropped. That was when realisation hit me like a ton of bricks. John and Jack had treated me so well so that I would give one of them my ticket!

The next day, everyone gathered to see who I was going to give my ticket to. Jack and John smiled widely, masking their anxiety. I cleared my throat and announced, “The extra ticket goes to …” Everyone waited in suspense. “Lisa!”

Lisa’s eyes lit up as she jumped for joy. Over the moon, Lisa ran towards me and thanked me, seemingly for a thousand times. John and Jack’s jaw dropped.

During the movie, I saw Lisa’s eyes fixed on the screen as she gazed in awe. The movie was amazing, Lisa and I decided to buy some souvenirs for John and Jack as we knew how much they wanted to see the movie. After that, we saw them waiting outside the cinema. I walked towards them and told them what I had overheard the other day. They apologised profusely and we became friends again.