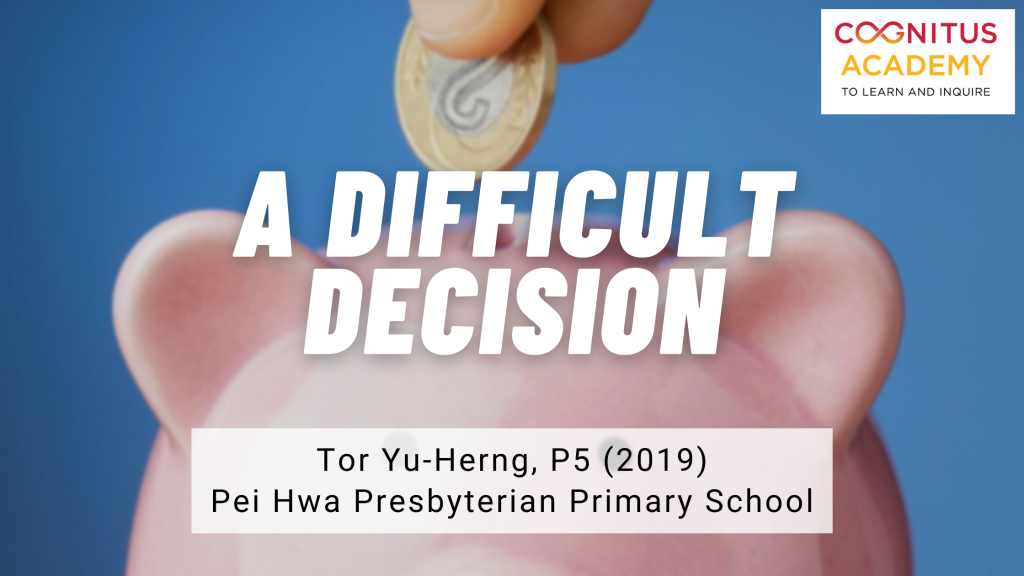 Gosh! I stood there, dumbfounded. The sight that greeted me was horrendous. My face was now pale, like a sheet of paper. I slowly stepped forward, being careful not to get my foot cut by the little shards. How could this have happened? I took a step back. I recalled the events so far, and could not fathom how the events spiralled so out of hand.

“Thank you and enjoy the rest of your day, class,” our science teacher bade us farewell. The rest of the class, along with me, drowsily returned the bidding. I was in a particularly good mood that day. I had finally saved enough money to upgrade my mobile phone. Besides that, my best friend, John, was coming to my house as I promised that I would show him my new video game.

“Beep!” The MRT fare gate opened and I walked through. I pranced down the stairs, bobbing my head along the music from my earphones. The ride home was rather enjoyable though the rest of the day would not be.

“Many thanks for the food, mother.” I thanked my mother as I cleaned my mouth with a napkin. At that moment, the doorbell rang. It must be John! My mother and I ran to the door to greet him. My mother was very fond of John as he was very kind and polite. She also had a soft spot for him as she knew that he was from a single-parent family and that his mother worked very hard to make ends meet. Therefore, John was usually alone at home with almost nothing to entertain himself or eat with.

“Hi John!” my mother greeted John cheerfully. “Hello, Auntie Lee,” John reciprocated in an equally cheerful manner. I greeted him as well. After my mother treated John to her delicious home-made laksa, he went to the living room to play with me. Little did I know that this would be the first of many disastrous events that would turn my life around.

“Um, I think that I need to go to the toilet, James…,” John said. I raised an eyebrow. We were almost finished and John would be leaving soon.

He nodded and left. That’s when things started to become strange.

“John! You don’t have to use the bathroom upstairs. There’s a toilet downstairs as well! John!” He was already gone. When he came back, he had an apologetic smile.

“Sorry. I forget that there is a toilet on this level,” he said sheepishly.

“Oh, I need to go now,” John said. I waved him goodbye. When he had left, I remembered something. I was going to go to buy a new phone! I ran up the stairs to my bedroom to collect the money I had saved doing household chores almost every day. I opened my piggy bank, anticipation bubbling up in me. Huh? Did I count that wrongly? I thought. I counted the money again. Still the same. I was $20 short! The question was, how? I was sure I had counted the exact amount. I put my head in my hands and groaned. How could this happen to me?

I thought that it would end that day but it did not. Every now and then, I would be missing $10 to $20. One day, I realized something. Every time I found I was short of some money in the piggy bank, it was right after John had left my house after playing with me. Besides that, whenever John came to play with me, he always said that the toilet downstairs was faulty and would use the toilet upstairs instead. Oh no! A part of me did not want to believe it, but I did not believe in coincidence. There was only one way to find out.

That fateful day, John said that he needed to use the toilet upstairs again, just as I anticipated. It was time to make my move.

I tiptoed behind John stealthily, being careful not to make any noise. Just as I thought, John was sneaking into my room. As he picked up my piggy bank, I said, “What are you doing, John?” However, the result was not what I expected it to be. Shocked beyond words,

John lost his grip on my piggy bank.

Crash! I stood there, dumbfounded. The sight that greeted me was horrendous. My faced was now pale, like a sheet of paper. I slowly stepped forward, being careful not to get my foot cut by the little shards. How could this happen? John stepped out of my way, his face burning red and trembling. I ignored him. I felt…helpless. There was nothing that I could do now. I glared at him, my eyes wide and unforgiving.

At that moment, tears streamed down John’s face for what seemed like forever. He stammered, “I-it was m-e. I-I stole the m-money. Then my m-m but its w-was because my m-mother had very little money to pay th-the bills. We haven’t had lights for a month. Sorry…”

Hearing the commotion, my mother rushed into my room. I explained the situation to her and asked for her help. She made an appointment for John’s mother to visit the Social Services Officer who helped them with their utility bill. Upon knowing that John’s mother had lost her job recently, my mother brought her to the Workforce Singapore Centre where they helped her to find employment. Before long, John’s mother found a better paying job.

On my end, I decided to give up buying a new phone and donated all my money to John. “Oh no, I couldn’t…” John refused, as he tried to stuff the money back to me. “It’s alright, now that my piggy bank is broken, I have nowhere to store my money!” I joked. Putting a hand on his shoulder, I said, “Okay, It’s alright. Next time, tell me first.” Just like that, our relationship strengthened more than ever before.